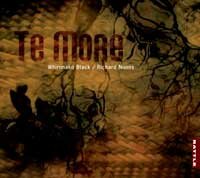 Whirimako Black, Richard Nunns
Te More is a tribute to one of Maoridom’s most famous early composers, Mahi-ki-te-kapua. The album consists of a selection of moteatea from Tuhoe, and pieces composed by Whirimako and Richard in the moteatea tradition. The concentrated simplicity and austerity of Te More connects the oldest and most revered traditions of waiata with the contemplative concentration of 21st century art music. Emotionally rich, texturally lush, this beautiful recording brings together two of our finest musical taonga.
Buy CD or download, Rattle | Buy or borrow from SOUNZ 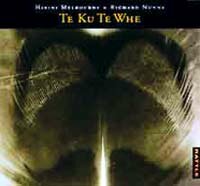 Te Ku Te Whe takes the listener into an ancient world, structured by mythology, history, and the moods of nature. The sound and images evoke the closeness of Maori music to the land, the sea and the wind.

It has become the definitive recording of taonga puoro (maori musical instruments) since it was released in 1993.

The waiata of Hirini Melbourne, and the sound of the purerehua, the putorino, the koauau, and vast range of pre-european Maori instruments, performed by Hirini and his musical partner Richard Nunns are now burnt into the musical consciousness of people throughout Aotearoa. Behind feature films, in TV commercials and sporadically sampled, the sound of the instruments is now an essential part of our bi-cultural identity. This is a relatively recent state of affairs. For many decades the instruments were confined to museums and the memories of kaumatua and kuia. Thanks to the landmark album ‘Te Ku Te Whe’, these sounds are alive and accessible to us today. Graham Reid, Music From Elsewhere
Buy or borrow from SOUNZ 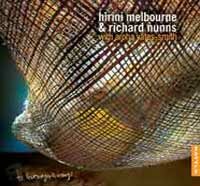 Te Hekenga-a-rangi :: those who descended from heaven

Hirini Melbourne & Richard Nunns with Aroha Yates-Smith
Te Hekenga-a-rangi was a finalist in the 2006 New Zealand Music Awards
Composed nine years after Te Ku te Whe, Te Hekenga-a-rangi brings the female essence into nga taonga puoro. Aroha both sings beautifuly and brings a profound knowledge of female spirituality and goddesses to the music. It is an intensely spiritual album. Te Hekenga-a-rangi refers to an ancient people said to have originated in the heavens who then occupied Aotearoa. Their spirit is in the shells and stones – and in these seamlessly melded evocative songs and inventive sonic structures.
The CD comes with a companion DVD containing performances and interviews.

The precise and lexical beauty of Richard Nunns and Hirini Melbourne

The story of the two musicians is well told in a documentary (directed by Keith Hill) that comes on a DVD bundled into …te hekenga-a-rangi. Among other things, they tell how learning the new-old instruments not only revealed old sounds, but old voices, and that revealing old voices also revealed old words.

They tell how mortal humans are not the only audiences for these lexical sounds, but also that marae have appreciated the iteration of them at graves and burial sites, where these musical, lyrical voices have been silent – in some cases for hundreds of years – and sorely in need of korero.

And yes, you too will find this music will communicate with parts you never knew existed, by means of timbres, orchestrations and arrangements you never thought possible. James Littlewood, www.publicaddress.net
Buy or borrow from SOUNZ 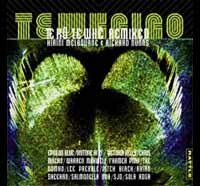 While he was still with us, Hirini Melbourne expressed a hope that the waiata would find new voices, new rhythms, and new listeners. And so Te Ku Te Whe (‘the woven mat of sound’) is unrolled again in Te Whaiao. Through its layering of digital textures and live performances, Te Whaiao (‘daylight’) opens a new window into a space in our shared musical consciousness. Te Whaiao is created with respect and aroha.

Te Whaiao earned Richard Nunns and Hirini Melbourne the Tui Award for the best Maori album at the New Zealand Music Awards 2007.
Each artist cunningly comes with a ready-made audience, the perfect springboard to unleash the music of ‘Te Ku Te Whe’ on a bigger, more mainstream audience. [Rattle Records'] Gummer says he chose the artists because he felt downbeat music would work respectfully with the original music … ‘There is a real breadth of sonic textures that aren’t in the original mixes, bringing in everything from full-scale electronica to dub. It really adds another dimension but doesn’t change the value of the original track,’ he says.
A year and a half in the making, the remixes are varied but all retain a deep, sparse and haunting atmosphere. Completely accessible yet interesting ‘Te Whaiao – Te Ku Te Whe Remixed’ is the kind of album which rewards repeated listening.
NZ Musician, 2006
Buy or borrow from SOUNZ 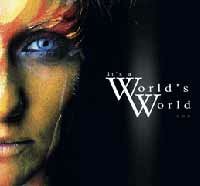