This has been another full year for Richard with many performances and presentations nationally and internationally. 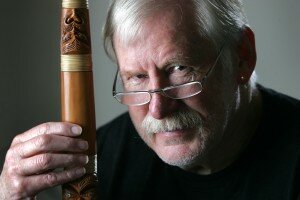 In New Zealand, he has performed in:

With the newly formed Nga Tae (comprising Richard’s dream team of Paddy Free — keyboard and electronica, Waimihi Hotere, vocals and his protege Horomona Horo also on Taonga Puoro) he has performed at –

This group have just been workshopping and recording material for their first CD due out in March.

In between times he has been recording for various CDs, contributing to a range of conferences, mentoring younger Maori artists and filming for a documentary on his “story”.

This has been a huge year for CDs and CD releases

The NZSQ CD Notes from a Journey, which includes He Poroporoaki composed by Gareth Farr and Richard Nunns, won the Best Classical Album in the New Zealand Music Awards. Releases have included