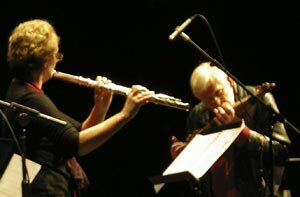 A celebration of whales, this work was composed for Richard and the New Zealand String Quartet by Gillian Whitehead while she was composer-in-residence at the Lilburn House in Wellington. It premiered in 2007.

The strings provided quiet patterns and static harmonies over which Nunns’s largely improvised music entered, tapping out rhythms and then playing high-pitched songs that were answered by the first violin. There were playful moments and flowing melodies, but most often the music told of the minor-key loneliness of whales and albatrosses. It is a sad, hauntingly beautiful piece, played with dignity and love by both the quartet and Nunns. Rod Biss, The New Zealand Listener, 2007

The taonga puoro used in this piece include the percussive tumutumu, karanga manu (pounamu bird-caller), two nguru and two albatross putorino (played as both trumpet and flute).

Puhake ki te Rangi has been recorded and toured to Germany, Czechoslovakia, Poland and Scotland in 2008

Tuhonohono has been recorded on CD.